“Music in the Park” starts July 11

Eight weeks of free music will be presented in the gazebo at Veterans Park in Lyons starting on July 11.

The village’s “Music in the Park” series presents a wide variety of music from 6:30 to 9 p.m. on Wednesday nights.

There will be free concessions and beverages provided by Lyons Mayor Christopher Getty. It’s a good idea to bring along a lawn chair. The park is on Lawndale Avenue, between Ogden Avenue and the village hall. 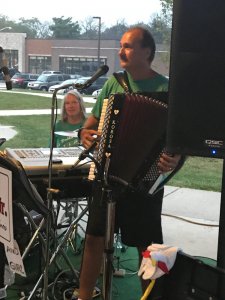 Local favorite Eddie Korosa, Jr., returns for “Music in the Park” in Lyons on July 25, playing polka music on his accordion. Photo by Steve Metsch.

Aug. 8: The Jolly Ringwalds specialize in hit songs from the 1980s.