Todd Evans, the head coach of Argo Community High School’s varsity football team the past three seasons, will not be on the sidelines for the 2018 season.

Evans, a teacher at the school, has resigned. The resignation was a line item on the consent agenda for the school board’s meeting of Nov. 13. The board unanimously approved his resignation without discussion.

After the meeting, Principal Chris Covino declined to discuss Evans’ letter of resignation.

“The letter is not mine to share with you. It wasn’t delivered publicly. It was delivered to the board of education,” Covino said. 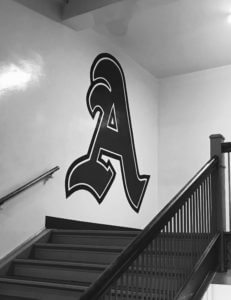 With Evans as head coach, the Argonauts went 0-9 in 2015, 1-8 in 2016, and 1-8 this season. The team’s lone victory this season was in the school’s first-ever night homecoming game in September.

Asked if Evans’ 2-25 record over three seasons played a role in his resignation, Covino said, “I can tell you it’s nothing about winning and losing.”

“I’m sure it can get tough, not seeing what you’re hoping. But I don’t want to speak for him,” she said.

Asked if she was surprised, Moran  said “I don’t know if  ‘surprised’ is the word I would use.”

“Football is one of those sports that has more expectations from community, society, school then there may be, say, in tennis. There’s the pressure of being the most public program in any school,” Moran said.

She didn’t know of any pressure from the booster club demanding for Evans’ departure after losing 25 of 27 games: “Our booster club is very small. Hardworking people. No pressures from a group like that.”

Asked about pressure from players’ parents, she said, “we weren’t feeling that.”

“When you’re not seeing the pieces come together, parents get frustrated. But was there pressure? I don’t think so,” she said.

Football, she noted, is the only high school sport in Illinois where teams do not automatically qualify for the playoffs. “That,” she said, “may provide some pressures coaches don’t feel in other sports.”

Evans was hired in April 2015 after three years as an assistant coach.

Evans replaced Jim Innis, a member of the Illinois Football Coaches Association Hall of Fame. Innis had coached the Argonauts for 27 seasons and stepped down after the 2014 campaign.