Daily Herald slams minorities and women in Tollway coverage The Arlington Heights Daily Herald has been running a series of news reports that read more like opinion columns, slamming the Tollway Authority for changing its administrative staff, a change most people agree has been good. But do the attacks from the newspaper also have a tinge of… 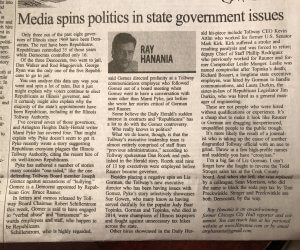