Some members of the team, as part of Argo’s centennial celebration Friday night, unveiled a banner honoring their 2nd place finish in the state in 1976.

The team pulled on a rope to unveil the banner high above the gym floor during a break between games played by the Argo boys and girls basketball teams.

“I wish it would have been sooner. When we were in school would’ve been nice. Better late than never,” Ralph Bitzenhofer, of Lake in the Hills, said.

The run to the title game “very surprising for us. We were playing really well at the end when it mattered,” he said.

All these years later, some hair is not as dark and some waists are a bit wider. But the memories are vivid. 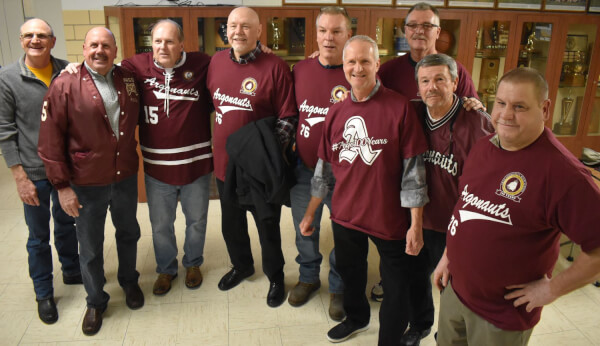 Some members of the 1976 Argo High hockey team that placed second in the state gathered for a banner-raising ceremony on Jan. 17. Photo by Steve Metsch.

Rick Watson said the team “got on a roll at the end of the year and started rolling off wins. They couldn’t stop us until we got to New Trier.”

In the title game against New Trier, starting goalie Greg Kamely took a slapshot that dropped him to the ice.

Despite his wearing a formfitting white mask like one worn by the Blackhawks’ Tony Esposito, Kamely suffered a gash on his forehead that forced him to the bench.

He refused to get stitches during the game, holding a towel to the bloody wound, cheering on his teammates.

Rick Burda, an assistant coach for that team, recalled that freshman goalie Joey Heim did the best he could replacing the injured Kamely, but New Trier prevailed, 4-3.

“LT gave us headaches. Coach told us when we played LT, everybody takes a body. We had to hit LT. They were very good skaters,” Fields said. “The only way to beat a great skating team was we had to put them on their ass.”

Doogan added: “We used to beat them up in the parking lot,”

Or maybe he wasn’t joking. The Argo team had a reputation as a rough-and-tumble bunch.

“We were the least favorite team anybody wanted to play,” Fields said.

“We were extremely physical and there was always going to be trouble. We had many fights, many bench-clearing brawls. When we showed up to play a game, so we didn’t get jumped in the parking lot, we had a police escort,” Fields said.

Longtime NHL fans will recall the Philadelphia Flyers teams of that era, often called the Broad Street Bullies. Led by Dave Schultz and Bobby Clarke, those Flyers took no prisoners.

“We were like the Flyers,” Watson, of Tinley Park, said with a smile. “Hockey was different then. It was acceptable.”

Doogan added “that was our style.”

“Our games at The Chalet were packed because they knew we’d play exciting hockey. We were playing LT (Lyons Township) once, play is stopped, me and the LT captain, E.J. Clark, we’re leaning on our sticks, watching fans brawl in the stands,” Doogan said.

Doogan fondly recalled when the Argo football team “called us a bunch of girly men, so we said bring it on the ice. We beat the hell out of them.”

Fields said the team changed for the better when Rick and Terry Watson joined.

“They put us into another level,” Fields said. The Watson boys had been playing with a travel team, but wanted to play with their high school pals.

The foundation was poured in the summer of 1975 when the Argonauts attended a hockey camp at the now defunct Bridgeview Park District’s Spectrum Ice Arena at 95th Street and 76th Avenue.

“That made a world of difference. We’d play from six in the morning to noon every day,” John Ruchaj recalled.

Sadly, hockey was dropped as a varsity sport a few years later.

Another player from the state runner-up team, Tim Bumber, was all smiles looking up at the banner Friday night. He had driven in from Michigan City, Ind., before the snowstorm so he would not miss the unveling.

“I haven’t seen a lot of these guys for a long time. It’s a great experience,” he said.

Steve Metsch is an award winning veteran reporter who previously worked for the Daily Southtown Newspapers, Chicago Tribune and Chicago Sun-Times. Metsch is a writer and editor at the Southwest News Newspaper group based in suburban Chicago, and a freelance writer for a financial newsletter, a health magazine and the Naperville Sun.
Email Steve Metsch at sm4610@sbcglobal.net