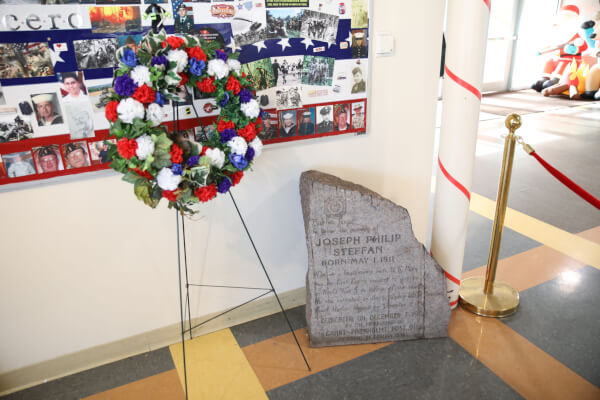 The Town of Cicero placed a Wreath at the Memorial Stone set up to honor the service of Cicero resident Joseph Philip Steffan, 32, who died during the Japanese attack on Pearl Harbor on Dec. 7, 1941 while serving on the U.S.S. Arizona, today a national memorial to the World War II tragedy. Here is an overview of Steffan’s family and background that was published in 2009 honoring the anniversary of the surprise attack that launched America into World War II

A few days after the Japanese attacked Pearl Harbor in the early morning hours of Dec. 7, 1941, Anna and Philip Steffan received the tragic news that their 32 year old son, Joseph, had perished on the U.S.S. Arizona.

The Arizona was docked at Pearl Harbor in Oahu, Hawaii when the Japanese bombers swarmed out of the early morning sunrise. During the attack, one of the planes dropped a 1,760-pound bomb that hit the ship’s forward ammunition magazines which exploded and sent the ship to the bottom of the harbor at 8:06 am that morning killing 1,177 crew members.

One of those who died was 32 year old Joseph Philip Steffan, who lived in the Town of Cicero at 1816 S. 60th Court with his parents before enlisting in the U.S. Navy. 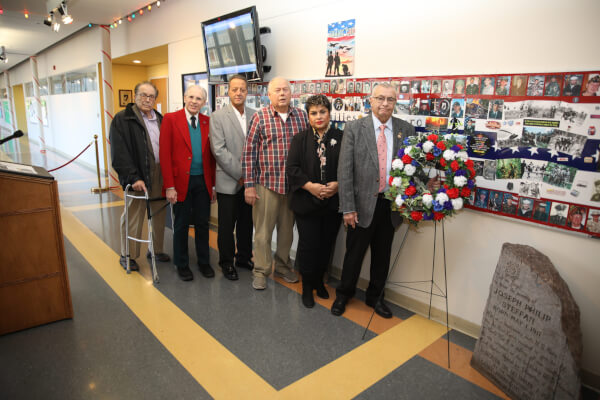 “The Navy contacted my grandparents to notify them of the death,” remembers Karen Toner, 59. about her uncle.

“But a few days later, my grandparents received a letter from Joseph who wrote that everything was fine, that he was happy and telling them about how much he missed them both. My grandparents were excited and thought maybe he had survived. But it turns out the letter was mailed before the attack. It’s late arrival only made the tragedy that much worse for them.”

The family did receive an official letter from President Franklin Delano Roosevelt, which read:

“In grateful memory of Joseph Philip Steffan who died in the service of his country at Pearl Harbor attached USS Arizona Dec. 1, 1941, he stands in the unbroken line of patriots who have dared to die so that freedom might live and grow and increase its blessings. Freedom lives and through it he lives — in a way that humbles the undertaking of most men.”

The letter, Karen Toner said, is not dated and has what looks like the President’s stamp.

“My mom, Ann, did not talk about her brother Joseph that much because the family had been beset with tragedy. Two of his brothers had died at an young ages before and when Joseph died the whole family went in to shock,” Karen Toner remembers. There were three brothers and three sisters, she said.

Toner said her uncle was very handsome, reminding many from the remaining photographs of actor Ray Liotta, who starred in many Hollywood films including Good Fellas and Casino. But she said that he kept a large memory album that included photographs and cards and other items from his years serving in the Navy.

Karen Toner said she has many of his photographs, noting “He was also the boxing champ of the fleet at the time. He was a hunk besides being a cutie. I always wondered what might have become of him had he lived.”

Memorial at the Town of CIcero Community Center to Joseph Philip Steffan a Cicero resident who died on Dec. 7, 1941 on the U.S.S. Arizona during the Japanese attack on Pearl Harbor.

Sadly, though, Karen Toner recalls, “My grandmother nor my mother really talked about him because of the tragedies with Joseph’s other brothers. It was very difficult as it was.”

It wasn’t until 1978 when Karen and her husband Edward traveled to Oahu, Hawaii and were able to visit the Arizona Memorial at Pearl Harbor that they began to look more deeply into his life.

“I really didn’t know much at all about him growing up other than that he died at Pearl Harbor. But we went to Oahu Hawaii in 1978 and visited the Pearl Harbor Memorial and that is the first time I started to learn and realize about my uncle’s life,” Karen Toner said.

Toner said they found his name inscribed on the memorial which, back in 1978, was open only to relatives of the lost sailors and other active duty military servicemen and women. That changed years later and tours are now conducted at the site for the public. But Karen Toner said she had to receive permission to visit the memorial when they went.

“It’s very strange for most people and even more for people who had relatives who died at Pearl Harbor,” Karen Toner says.

“When we went there, oil was still seeping up from the ship below and you would see these oil slicks are still coming up from the water where the Arizona sunk that day so many years ago. It gives you goose bumps because it is almost like they are still alive and haven’t gone to peace yet. This oil keeps oozing out of the top of the water.”

Karen Toner said that over the years she learned much about her uncle, today considered an American war hero for his service and sacrifice that morning that FDR in his speech to the nation declared as a “day that will live in infamy.”

“What I did learn about him was that he was a career sailor. He traveled to Thailand, the Philippines, all over. He traveled with the Navy in all these stops. He had a wonderful, wonderful life. My grandparents and the family were very poor at the time. They didn’t travel at all. My grandmother was a seamstress and my grandfather was tailor. He would write to them about all the places he visited and he wished they could see what he saw. They all sat around as they read his letters describing where he had been,” Karen Toner remembers her mother telling her.

“It was interesting the way he wrote, like wishing his mother could be there and he missed her and his family. It was very sentimental for me to read these letters. It’s wasn’t like the macho things you might think a soldier might write. It was very personal like he really missed his family.”

“My uncle lived in Cicero at 1816 S. 60th Court,” Karen Toner said. “We lived in the house for years before moving out to Naperville.”

Sometime around 1995, Town of Cicero resident Walter Luksta traveled to Pearl Harbor and discovered that one of the Town’s resident were among the Pearl Harbor soldiers who had died.

On Dec. 7, 1996, Luksta, former Assessor John Kociolko and a former neighbor of Steffan George Kostakas, worked with the Town of Cicero to erect a memorial to honor Joseph Philip Steffan’s service and the sacrifice he made that morning that changed America. The memorial is placed next to the Veteran’s Memorial Courtyard south of the Town Hall.

“We have many veterans from Cicero that we honor with our veteran’s Memorial,” noted Town of Cicero President Larry Dominick. “I think the story of Joseph Philip Steffan  hits home in a  very personal way because of the significance of that very first attack on our nation during World War II. We’re honored to be able to share in his memorial to the fallen and to recognize the service of all of our veterans here in the Town of Cicero and throughout the country.”

On Monday, Dec. 7, 2009 the Town of Cicero and area veterans gathered at the Town of Cicero Veteran’s Memorial, 4949 W. Cermak Road to remember Pearl Harbor and the sacrifices made by men like Chief Petty Officer (BMC) Joseph Philip Steffan. The ceremony  was officiated by Kociolko who served as the event emcee.

Several years later, the U.S. Navy presented the Town of Cicero with a piece of metal taken off of the U.S.S. Arizona that is also on display at the Steffan Memorial at the Town of Cicero Community Center. Town President Larry Dominick and the Cicero Board off Trustee host a commemoration of the Pearl Harbor attack each year in December.

The commemoration is among dozens hosted by the Town of Cicero that includes a commemoration of the life of the Rev. Dr. Martin Luther King Jr., held in January, celebrations of independence for Mexico, Puerto Rico, Lithuania, the Fourth of July celebrating America’s independence, Casimir Pulaski Day, St. Patrick’s Day and many more. For more information on the Town of Cicero’s events, visit www.TheTownofCicero.com.

(Permission granted to republish in print or online with full attribution and unedited. For additional information, contact rhanania@thetownofcicero.com)