Pappas: Go to cookcountytreasurer.com to Read Your Tax Bills Now, More Than a Week Before Mailing

Cook County property tax bills due August 1, 2019, have been posted to cookcountytreasurer.com, where homeowners can see how much they owe more than a week before the bills are  to be mailed, Treasurer Maria Pappas said today.

The printed bills, with a due date of August 1, are to be mailed by the beginning of July.

It’s important that you visit the website to doublecheck the information on your property. 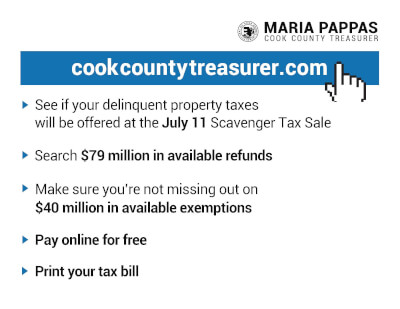